I’m so pleased to announce that the audiobook of 50 Ways to Worry Less Now is now available! Get it from Audible, Amazon, or i-tunes!

Did you know that 50 Ways to Worry Less Now almost didn’t exist?

After I stated my intent to write this book, I experienced a period of turmoil and resistance. My whispered lies seemed to wake up and say, “What? This can’t be! There’s no way you’re going do that!” “You can’t get this honest about your life; people will think you’re neurotic,” and “You can’t handle it if people criticize you.”

Suddenly, I found myself unable to write.

A quote from Goethe sums up the coincidences that followed soon after: “The moment one definitely commits oneself, then providence moves too. All sorts of things occur to help one that would never otherwise have occurred.”

So, how did “providence” move me forward? I discovered a new tool that helped me write from my heart: Meditation.

Despite knowing about the many benefits of meditation, I had never been able to get the hang of it. I just couldn’t quiet my incessant thinking long enough to feel successful.

Here’s how providence let me know it was time to learn this valuable skill:

At that point, I looked up to the heavens, and said, “Okay, Okay!” and began to meditate most mornings. Within a few years, I had a solid first draft of this book. A few years later, in early 2018, I published the paperback and e-book.

Last year, when I went to the bank to set up a checking account for my new business, I mentioned to the gentleman that I had just written a book. He replied, “Can I get it as an audiobook? That’s all I listen to.” Wow! Was I ever surprised.

So, last fall, I began the process of learning all about creating an audiobook. You can see my journey in YouTube videos number one; two; three, four, five, and an overview in this Blog. The final video celebrating the completion of the audiobook is here.

So, how does meditation fit into my life today? I find if I skip my morning meditation, I have less serenity and bravery to deal with my challenges.

For example, I recently began my day by reading many emails about a committee I’m on. When I later went to my desk to piece together some new ideas for a workshop, I noticed I was tense and couldn’t find the right ideas. I then stopped, asked myself, “What’s wrong?” and remembered I had neglected to meditate.

Instead of criticizing myself, I gave myself kudos for noticing my tension. Recalling that it’ s never too late to start a day over, I did just that. As I entered the stillness, I could almost hear my body saying, “OK, the wise one is driving the bus now. We can stop the high alert.” I received a wondrous result: I found the exact inspiration I had been seeking.

So, if you have a dream you’d like to pursue, try adding meditation to your daily routine. I like Insight Timer‘s guided meditations. They’re free and address a variety of topics.

Give it a try and let providence show you what’s really in your heart to contribute to the world!

Gigi Langer holds a PhD in Psychological Studies in Education from Stanford University. She is an acclaimed teacher, author, and speaker who has helped thousands improve their lives at home and work. Gigi hasn’t had a drug or drink for over 30 years, although she does occasionally overindulge in Ghirardelli chocolate and historical novels. She lives happily in Michigan with her husband, Peter and her cat, Murphy.

Well, the time has finally come! After six months of work, next week Robin Waters (narrator) and I are releasing the 6-hour audiobook for 50 Ways to Worry Less Now! You might have a few questions, so here’s a brief Q & A.

If it’s coming out this week, then why does the banner above say Oct. 22-28? This week is the “soft launch” (without a ton of promotion), but you can get it as soon as it goes “live” on Amazon, Audible, or i-tunes. The “full launch” is October 22-28 with all the hoopla of a blog tour.

What’s a blog tour? I’ve hired Jess at Audiobookworm to schedule “hosts” to feature the audiobook on their blogs or websites between Oct 22 – 28. Ideally, this burst of promotion sells a lot of books in a short amount of time, resulting in “bestseller status” on Amazon/Audible.

How can I help? Even if you don’t have a website or blog, you can still do a LOT. And we’d really appreciate it! You can 1) post reviews of the audiobook or 2) participate in the online blog tour.

1) LISTEN TO & REVIEW THE AUDIOBOOK. (I offered a free copy to the first 20 who sign up; but I still have a few more available. If you want one, contact me.) Please post reviews on Audible, Amazon or i-tunes; Goodreads; and all your social media sites. (You can do this anytime.)

2) JOIN THE Oct. 22-26 BLOG TOUR (as a “Host”). To participate, you need your own website (or blog) about Audiobooks, Recovery, or Wellness. During the tour week, you post a review, &/OR audio excerpt, &/OR the cover and description, &/OR a written interview with me. Or, if you wish, I’ll even contribute an article for your blog! ** To sign up as a host: Click HERE between Sept. 22 – Oct. 15, and Jess will send you all the information. Her directions are very clear and she’s so kind. You’ll receive the free audiobook, plus you’ll be eligible to win a free giveaway (your choice of a paperback of “Worry Less Now” with a Workbook, or 2 Skype personal coaching sessions with me).

PS. YOU ALREADY KNOW ME, BUT HOW ‘BOUT OUR AUDIOBOOK NARRATOR, ROBIN WATERS? You may recall that I tried to begin narrating the book myself, but soon found the technology plus all those hours in a closet too daunting! So, I went in search of a narrator and found the perfect person.

Robin Waters grew up in Southern California and left home early to get professional theatrical training and pursue her dream. In her early twenties, she found a new passion–holistic health–and shifted her focus to become a wellness educator.

She currently lives in Canada where she stays busy writing, demonstrating how to cook healthy food, and leading workshops and women’s circles. She loves cuddling and reading out loud with her son and daughter. Now that they are older, she has returned to her first loves of narrating and performance. There is something magical about connecting with others through voice and sharing the human experience with good storytelling and characters.

Partnering with Gigi to produce this book was a gift, as it was a beautiful combination of her two passions. She has spent a lifetime overcoming worry/anxiety, and finding herself through expression and connection. She hopes this audiobook brings you more inner peace and is a comfort on your journey toward a vibrant life.

Gigi Langer holds a PhD in Psychological Studies in Education from Stanford University. She is an acclaimed teacher, author, and speaker who has helped thousands improve their lives at home and work. Gigi hasn’t had a drug or drink for over 30 years, although she does occasionally overindulge in Ghirardelli chocolate and historical novels. She lives happily in Michigan with her husband, Peter and her cat, Murphy.

Listen to Chapter 5, “Using Growth Practices to Recover Your True Self” right here!

You get to hear it right now, weeks before anyone else, just because you’re a loyal subscriber to my blog and/or newsletter.

I knew it was time to publish an audio book when people started asking how they could find it on Audible. It took a while to find the right time and the perfect narrator, but we did, and it’s only a few weeks away from being released!

I chose Chapter 5 for you because it’s the most honest — and it was the hardest one to write! It describes how I used honesty, power, choices, and 13 tools to heal the layers of pain that drove my self-destructive behavior. I hope you find something here of use to you or your loved ones.

Just click the red arrow below to listen to the 45-minute chapter. PLEASE SEND FEEDBACK about what you like or find problematic. That would be a HUGE help. Thanks! Happy listening!

Gigi Langer has been clean and sober for 33 years, and holds a PhD in Psychological Studies in Education from Stanford University. She’s a sought-after speaker and retreat leader who has helped thousands improve their lives at work and at home.

Order a PERSONALIZED SIGNED COPY of award-winning 50 Ways to Worry Less Now HERE. Also available from from Barnes and Noble , Amazon (5 stars), and all e-book vendors.

What bugs you? Is it something or someone you can’t change, but wish you could? Yup, the fly in the ointment! It happens to me all the time.

Try Kermit’s approach: just chew it up and swallow it. It’s merely acceptance–digesting the reality of the situation and getting on with your life.

I needed to remember this lesson recently when my book distributor went out of business. Upon reading the notice, I just wanted to spit out the unpleasant news. It just couldn’t be true!

Then I began to roll it around in my mouth, as I tried to figure out how to fix it. Eventually that effort failed, and I had to just gulp it down, exactly as it is.

Now that I’ve absorbed this truth, I can look at it differently. For example, I realized that the defunct printing company had been charging me a lot! And that led me to finding new and creative ways to distribute my book.

For example, soon you’ll see a special offer of a personalized SIGNED COPY (available now at GigiLanger.com/buy mailed right to your home. Although people can still get it from Amazon and Barnes and Noble, this special deal allows me to connect with you more directly.

So, when life throws you a curve ball–something that really bugs you–just gobble it up and keep moving, knowing that a better way is coming along.

It works for me and for Kermit too! 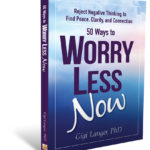 Gigi Langer has been clean and sober for 33 years, and holds a PhD in Psychological Studies in Education from Stanford University. She’s a sought-after speaker and retreat leader who has helped thousands improve their lives at work and at home. Read her blog here or order her award-winning book (50 Ways to Worry Less Now) from GigiLanger.com/buy, Barnes and Noble, Amazon (5 stars), and all e-book vendors.